The first air-step, or aerial as they are known today, was performed by Frankie Manning and his partner at the time, Freida Washington.

Frankie was an established dancer amongst the scene at the Savoy Ballroom – often demonstrating his gift for dancing, and his competitiveness in the informal jamm sessions in the Kats Korner. Frankie and his partner were also frequent participants in the regular Saturday night competitions – in fact it was such a competition that spurred on the famous first air-step.

Friendly rivals of Frankie and Freida in these competitions were George ‘Shorty’ Snowden and his partner Big Bea. George was a short man, and Bea was, well… big! This couple was known for completing a comical step in which Big Bea lifted Shorty onto her back. Frankie liked this step and suggested to Freida that they do something similar. Freida’s response was that there was no way that she would be carrying Frankie up on her back! Frankie had a better idea – he wanted to pull Freida onto his back and then flip her over his head so that she would land on her feet in front of him. The ballroom scene was known for doing lifts in their dancing, but these were often long and orchestrated lifts where the male dancer would lift the girl above his head gracefully, twirl her around and then set her gently back on the floor. What Frankie had in mind was a step (not a lift) where the girl was thrown into the air and then landed in time with the music.

In order to be able to do this new step, Frankie and Freida practiced for three hours a day, every day for two weeks. Freida lived right next door to Frankie and they would often call out of their bedroom windows to each other in order to organise a practice session.

So there they were, in Frankie’s apartment every day for hours attempting this brand new air-step with a mattress to help cushion any falls. Because there were no dance schools teaching these steps at this time, Frankie and Freida had to work out everything themselves – how to set up for the step, how to perform the step and how to land it successfully. Finally they got to the stage where they could complete the new air-step without fail.

It was at a competition at the Savoy Ballroom with 5 of the best Lindy Hop couples in the world, that Frankie and Freida chose to do it. They were the last couple in the competition to dance and they were ‘just swinging out’ to the Chic Webb band when Frankie asked Freida if she was ready. She replied, “Yeah! Let’s do it!” So they did a couple of swing outs, and then they did the step. He pulled her onto his back, flipped her over and as she landed back down in front of him with a ‘boomp’! – Chic Webb had managed to catch the music as she landed. The 2000 people at the Savoy that night erupted in applause and everyone started screaming and hollering – from the response, Frankie thought to himself, “Man, maybe I did something!”

Probably the most famous Lindy Hop routine is featured in the movie Hellzappopin. The dance scene stars Frankie Manning and others and includes some amazing air-step choreography. 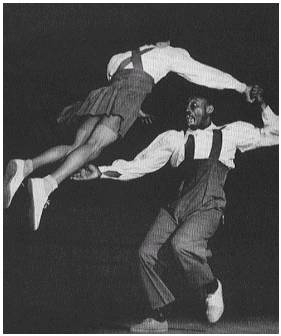