Putting the ‘Big’ into ‘Bands’

How important were the Great Swing bands of the 30’s and 40’s to the culture and evolution of the dance we know and love today? Well, let’s just say that it is thanks to these musical entrepreneurs that we’re not milling ‘round dance floors today doing the ‘Sit’, the ‘Shuffle & Yawn’ or even the ‘Man it’s Late, I’d Better Be Truckin’ On Home’. How simple musicians came to awaken popular culture to the freedom of improvisation in music and movement in that huge grand ballroom is no fairytale, but it is a story with plenty of magic.

Dancing at the SavoyAs with so many turning-points in human social history, the glory days of the Savoy Ballroom, known for its great bands and great dancers, notably Frankie Manning, is characterized as much by what didn’t happen as what did. The management did not follow the practice of segregating ‘coloured’ staff from patrons, or of hiring predominantly white bands like its neighbour the Cotton Club and other well-known Harlem clubs.

The first Bands to play at the Savoy in 1926 set the pace for the next two and a half decades. They were picked carefully for their innate talent and prestige within musical circles – often invited from the Jazz communities that were growing throughout the United States. They pulled together often unusual combinations of instruments, heavy on brass, and encouraged experimentation and soloing from individual band members. The Savoy bands achieved an important balance between teamwork and individual expression. The teamwork is evident in their tight musical arrangements, endless rehearsals and the immaculate care they all took with their instruments and appearance. Individuality shines through in the now classic ‘call & response’ that we hear in the music.

Some music historians say that the musicians at this time used their instruments like voices, to tell a story, and that they entered into real dialogue with each other. Similarly, the singers who accompanied the bands are said to have used their voices as instruments. (Consider the scatting of Ella and the trumpet-like vocals of Louis Armstrong). Perhaps the real magic happens when dancers, moved by the stories they’re hearing, and the irresistibly dynamic nature of this ‘musical conversation’, get up and start using their bodies to tell their own tales.

Dancing at the SavoyWe know that the elite dancers of the Savoy would often come early in the afternoons to practice their moves while that night’s band rehearsed. Both the dancers and the band would test tempos and solo breaks with each other. But, if a band invited to play at the Savoy wasn’t able to keep the dancers on the floor, they were never invited back.

Louis Armstrong is credited with much of the evolution of dance and music that happened at the Savoy. He took the New Orleans style of group improvisation, where all the players improvised simultaneously, one step further. He brought solo improvisation to an ensemble group. The swing ensemble became tighter and more organized, adding more instruments and calling for arrangements of whole sections rather than single instruments. Soloists were allowed greater and greater individual freedom to stretch out, in turn, one at a time. The dancers, following suit, stretched out in their solos too. All these changes in music created new feelings and sources for expression which came through the bodies of dancers.

Fletcher Henderson and Duke Ellington, who expanded the musical concepts to include whole sections of an orchestra — helped develop swing music, and thus the dancing done to it. The rhythms called for a more syncopated basic dance step, and the allowance of time for musical improvisation within the musical structure, inspired the dancer to “go out” and improvise within the dance structure.

Dancing at the SavoyJoe Jones (Count Basie Band) and Gene Krupa (Benny Goodman Band), introduced the many different sounds and textures that could be produced by the drums.

Walter Page, bassist of the Count Basie band, played a four-beat walking bass, which added a new dimension to swing music. It traveled more, and added to the excitement of the dancers.

Music, previous dances, social climate and reactions, and the desire to try something new, to create something specific to one’s own generation, all add up to the magical birth of a new dance and a new kind of dance band.

The spread of Swing correlates well with the movements of the Savoy bands. The bands traveled, people traveled, Southerners influenced Northerners, Easterners influenced Westerners and bands toured other continents including Europe up until World War 2.

During the thirty years it was open*, about 250 big bands are said to have performed on the Savoy stages. There were actually two bandstands so that there was live music all night without a break, and it often hosted ‘Battle of the Bands’**. The ‘house’ bands included Chick Webb’s orchestra (with the singer Ella Fitzgerald, and the saxophonist Louis Jordan) and the Savoy Sultans. Other bands that played there include those of Duke Ellington, Count Basie, Jimmie Lunceford, Benny Goodman, Artie Shaw, Cab Calloway to name just a few.

Frankie Manning, voting with his feet, counts many of the Savoy bands among his favourites to this day. He celebrated his 85th Birthday party in 1999 to the strains of the Count Basie band (minus the Count) and George Gee and His Make Believe Ballroom Orchestra (including various Basie, Lionel Hampton & Duke Ellington original musos). Frankie’s personal collection of favourite toones includes Glenn Miller’s In the Mood, as well as other Swing classics. The list is heavy on the signature tunes of Basie, Ellington, Lunceford and Goodman with the odd Eskine Hawkins and Lionel Hampton number.

The Savoy may have lost its clientele to Rock ‘n’ Roll in the mid-fifties and given up its powder blue walls and twin bandstands in 1959, but swing music lives on. To re-live the magic we have a stack of resources at our fingertips – the recordings, the photographs, the stories and the dances.

To read an account of the energy of a Savoy dance party – written by the man who was said to write jazz the way musicians played jazz – check out Otis Ferguson’s Swing tribute at http://www.thenewrepublic.com/jazz/harlem

* The Savoy hosted many and diverse events during the Swing years- including boxing matches, roller-skate parties and basketball games. The famous Harlem Globetrotters called it their home, known then as the Savoy Big Five.

** See a table of the results of these ‘Battle of the Bands’ contests. 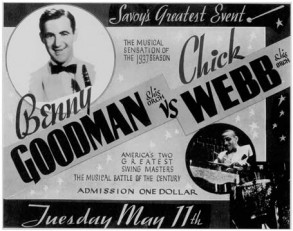