Frankie’s Life After The ’40s

Whitey’s Lindy Hoppers disbanded during World War II and Frankie Manning enlisted with the US Army. Upon his release in 1947, he formed his own dance troupe “The Congaroos”. They toured with many popular artists such as Nat “King” Cole, Dizzy Gillespie and Sammy Davis. However music was changing; already big bands such as Tommy Dorsey then soon after Cab Calloway’s and Artie Shaw’s big bands collapsed. Jazz music was developing in another direction with solo singers rising to the forefront, the biggest being Frank Sinatra, and bands were becoming smaller. Dance too was moving on with popular taste turning to Rock ‘n’ Roll in the 1950’s. People enjoyed improvising on their own so a partner was not required.

Frankie Manning moved on too. He married in 1954 and then in 1955 he settled into a job at the US Postal service, where he stayed for thirty years. He stopped dancing professionally and instead concentrated on raising a family.

It was not until 1983 when an old club, Small’s Paradise, was revived that the savoy greats began to congregate. It was Norma Miller who dragged Frankie out to dance. He was reluctant though and stayed on the sidelines, as another Whitey’s great, Al Minn, stole the dance floor and played mentor. When Al died Small’s Paradise shutdown. But the flame had been reignited and so when The Cat Club opened Frankie began making regular appearances, taking on a more prominent instructing role to the young who were keen to dance.

It was at this time that the young dancers (Erin Stevens, Steven Mitchell, Ryan Francois and a Swedish troupe) were descending on New York.

They were not content with just watching the old film footage and instead they sought out the original Lindy Hoppers. In particular Erin Stevens and Steven Mitchell looked up Frankie to coax him out of teaching retirement.

“We had all gone looking for Frankie Manning and the original Whitey’s Lindy Hoppers. We went and found him and said, ‘Teach us. Show us the stuff.'” – Steven Mitchell

At first Frankie Manning said, “No”. He was reluctant to return to the past – everyone had moved on. However, one night they all turned up at the Cat Club and Frankie saw how passionate Erin and Steven danced.

“They had soul and they were already really good dancers. I thought, maybe I can help them get better than…they are.” – Frankie Manning

It was too irresistible. So in 1986 Frankie began teaching Lindy Hop again. He is now the biggest promoter of swing. He is so successful because not only does he love to dance but he also loves the enjoyment that comes from teaching beginners how to start out. He is the pied piper of Lindy Hop! 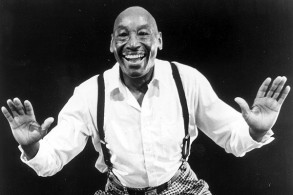